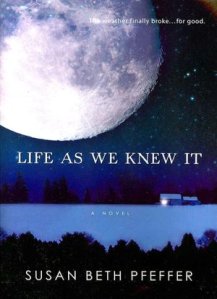 Life As We Knew It by Susan Beth Pfeffer (Last Survivors #1)
Released:
October 2006
Publisher: Houghton Mifflin Harcourt
Add to Goodreads
★★★☆☆
Synopsis:Miranda’s disbelief turns to fear in a split second when a meteor knocks the moon closer to the earth. How should her family prepare for the future when worldwide tsunamis wipe out the coasts, earthquakes rock the continents, and volcanic ash blocks out the sun? As summer turns to Arctic winter, Miranda, her two brothers, and their mother retreat to the unexpected safe haven of their sunroom, where they subsist on stockpiled food and limited water in the warmth of a wood-burning stove.

Told in journal entries, this is the heart-pounding story of Miranda’s struggle to hold on to the most important resource of all–hope–in an increasingly desperate and unfamiliar world.

“Chilling” were my thoughts as I made it through the first fifty pages. The way Susan Beth Pfeffer writes about the events leading up to the apocalyptic event and the events that happen shortly after is absolutely chilling. I think this is because I could actually see people in reality acting the way they did in the book. Leading up to the asteroid crashing into the moon, people have a sort of morbid fascination with the event. All of Miranda’s homework revolves around the moon and, on the night of the event, everyone is throwing a party to marvel at the once in a lifetime sight. Unfortunately, nobody really knew what they were in for.

The story itself was written in a diary format. I think for readers, this can be pretty hit and miss. While it gives the reader insight into Miranda’s thoughts, it’s also kind of written matter-of-factly. Miranda doesn’t wax poetic about the apocalypse, and I was bummed that the descriptions about how the world looked were lacking. Descriptions of how Miranda’s physique changed over the year when she was essentially starving were also lacking.

The character interaction was really interesting in this book, but then what would you expect if you were cooped up in a house with no electricity with the same people day after day, and going outside means you may fear for your life? The relationship that really got to me was Miranda’s relationship with her friend Megan, who is very religious. Once the world starts coming to an end, Megan gets swept up by a cult, and Miranda slowly watches her friend disappear. This filled me with such sadness and disgust as Megan just wasted away.

My biggest complaint about this book was considering it’s the end of the world, the people in Miranda’s town had it easy. All the families just stayed to themselves, and I wasn’t buying that. If the world is coming to an end, I’m expecting violence, looters and robbers, and beggars, and those people just didn’t exist in Miranda’s world. Then again, maybe these situations will surface in the books that follow Life As We Knew It. This is another instance where I unknowingly picked up a book, thinking it was a stand-alone novel, only to find out it’s part of a series.

Overall,
Even though some aspects of this story were unbelievable, I still really enjoyed it. And even though I missed the vivid descriptions of the world, I appreciated the diary format of the book since it didn’t romanticize the end of the world.

4 replies to Book Report: Life As We Knew It by Susan Beth Pfeffer

My @davidstea order arrived just in time for #matchamonday (hosted by @teaisawishblog ) and I’m confident this impulse buy was totally worth it 😆. First up is the Earl Grey Cream Matcha, and IT TASTES JUST LIKE TRIX CEREAL. I was so skeptical of an Earl Grey flavored matcha, but this was love at first sip.
Starting Monday off the right way by setting my intentions for the week and sipping an iced matcha latte in the backyard. (Also, that granola is BIRTHDAY CAKE GRANOLA, and Oliver and I are obsessed with it). (#matchamonday with @teaisawishblog ) #tea #teatime #instatea #teastagram #teasofinstagram #teablogger #teadrinker #teaaddict #tealove #tealife #teagram #teaholic #ilovetea #teaandtarot #matcha #matchalatte #matchalover #tarotcommunity #dragonagetarot #tarotreadersofinstagram #teaoutdoors
I was inspired by @matchathomas / @meandacuppatea to add some macerated strawberries to my Monday morning matcha. Now if I could just get my hands on some boba 🤔. Still, I’m kind of in love with this 😍. (#matchamonday with @teaisawishblog / matcha from @matchalife.co ) #tea #teatime #instatea #teastagram #teasofinstagram #teablogger #matcha #matchalatte #matchamilktea #matchalover #matchatea #icedtea #tealatte #dailyritual #michiganblogger
It felt like a slow, syrupy white tea afternoon. Perfect for the Benifuki White from @unytea.store #tea #teatime #instatea #teastagram #teasofinstagram #teablogger #teadrinker #teaphotography #teaaddict #tealove #tealife #teagram #teaholic #whitetea #unytea #gongfucha #gongfutea #totoro #teapet #japanesetea
LOOK AT THIS TEA 😍⁣
NEW VIDEO! ⁣
Perfect weather is perfect 💛⁣⁣
It was a Horse-Girl-Clique-in-the-backyard kind of morning (@white2tea ). A I-forgot-how-rejuvenating-soft-green-grass-can-be kind be kind a morning. A reflecting-on-ways-my-cup-is-overflowing kind of morning. ⁣
Reflecting on the Queen of Pentacles while sipping Boba Milk Tea from @dessertbydeb . I can’t say whether it lives up to its name or not, but I can confirm it’s delicious. Malty, sweet, and a hint of creamy vanilla. It’s everything I want in a breakfast tea 😍.⁣