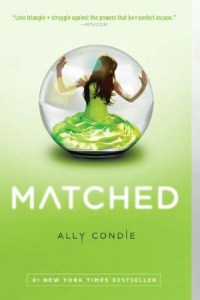 Matched by Ally Condie
Released: November 2010
Publisher: Dutton Juvenile
Add to Goodreads
★★★☆☆
Synopsis: Cassia has always trusted the Society to make the right choices for her: what to read, what to watch, what to believe. So when Xander’s face appears on-screen at her Matching ceremony, Cassia knows with complete certainty that he is her ideal mate… until she sees Ky Markham’s face flash for an instant before the screen fades to black.

The Society tells her it’s a glitch, a rare malfunction, and that she should focus on the happy life she’s destined to lead with Xander. But Cassia can’t stop thinking about Ky, and as they slowly fall in love, Cassia begins to doubt the Society’s infallibility and is faced with an impossible choice: between Xander and Ky, between the only life she’s known and a path that no one else has dared to follow.

I was weary about reading Matched by Ally Condie (how many times have I started out my reviews like this?). For starters, I was very much aware of the hype surrounding the book– something that probably would have eluded me if it weren’t for fellow book bloggers. Don’t get me wrong, hype isn’t inherently bad, but it’s often hit and miss. I was also weary because based on the summary and other bloggers’ reviews, Matched revolved around a romance, and I’m always skeptical of romance in young adult books. (Then again, I’ve said that here, here, and here, and I’ve been pleasantly surprised each time. Maybe my tastes have evolved, and I shouldn’t be so quick to put my nose up.)

Matched by Ally Condie paints a bleak portrait of a Western society that a government has, at one point, deemed to be over saturated with culture. Now, the world Cassia knows has been reduced to just 100 paintings, 100 poems, 100 songs, etc. Also, there is little choice in Cassia’s world. Decisions are left to statistics and the Sorters who analyze them. An individual’s vocation, the type and amount of food they eat, the types of activities in which they can participate, where they live, and who they marry is predetermined by Officials. And yet, this society, built and maintained by officials and statistics is about to crumble. By doing the things we take for granted, like learning to write cursive, reciting [forbidden] poetry, and falling in love with someone [she wasn’t matched with], Cassia is challenging the very foundations on which her society is built.

I really appreciated the way Ally Condie incorporate poetry into Matched. For example, “Do not go gentle into that good night” by Dylan Thomas had a functional purpose in the prose. By just knowing the poem, Cassia risks her family’s well-being. The poem also has value among a cultural black market too. Then the poem is also symbolic of Cassia’s character, yet it doesn’t seem trite.

What I loved most about this book? Dare I say it? The love triangle. I never thought I’d see the day where those words were ever typed by my own fingers. The love triangle seemed natural; it did not seem forced– not like, there is a love triangle in this story for the sake of having a love triangle (see also: for the sake of all things trendy or for the sake of the ever lusty reader). The relationships made sense! Cassia loves Xander, her most handsome BFF4E. And, according to the statistics, they are each other’s perfect match; there should be no second guessing, right? Yet, when a glitch in the matching (or better yet a mistake) makes the ever mysterious Ky the apple of Cassia’s eye, things start to tumble out of control. He’s handsome and familiar like Xander, but he is also an anomaly. An anomaly– that’s not a good thing, by the way.

Perhaps my only complaint about the story is the vagueness of the geography and current events. I wish there was an illustrated map on the inside cover or something! What I wanted to know was where Cassia lived in reference to the war-torn Outer Provinces. Where is Cassia’s world in reference to our world? I’m also kind of confused about the war that’s going on. I have to assume that Ally Condie is only letting on as much information that Cassia’ would be aware of, but it’s frustrating because so little information was given that I kept forgetting about the war. That being said, I’m really interested to know why a perfect society would be at war.

Overall,
I loved this book, and I devoured it in three sittings. I thought the characters and the world were rich with development, and I though Cassia’s relationship with Xander and Ky was lovely and genuine.