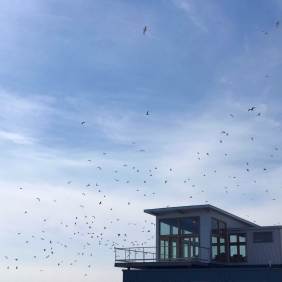 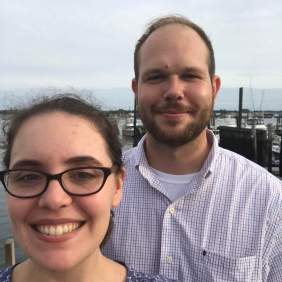 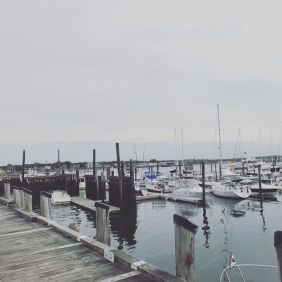 I miss flying in to the city and thinking, I don’t think I’ve seen this many pine trees in my life. I miss meandering the streets, exploring the shops, and being overwhelmed by all of restaurant choices. I miss hearing the sound of the ferry horns honking as they entered and exited the harbor. I miss tasting as many of the IPAs on the menu at Salvage BBQ and Slab Sicilian Street Food that our livers could handle and determining that Substance IPA from Bissell Brothers was the best (but still not quite as good as Michigan’s own Two Hearted). I miss how the temperature dropped what felt like 20 degrees the moment we rode the ferry out into Fore River/Casco Bay. I miss having Great Diamond Cove all to myself, or so it seemed, and I miss riding bikes all over the island. I miss the pickles– the weird, mustardy pickles. And the lobster rolls. I miss the lobster rolls too.

We spent most of our days roaming around the city streets in search of pinball machines, comic books, craft beer, and the best restaurants, and we hit the jackpot in Portland:

The Holy Donut offers a sweet treat like no other. The key ingredient in their delicious, fried treats…is the potato. Yes, the Holy Donut puts potatoes in their donut dough, which creates this incredible yeast donut/cake donut hybrid. It’s cakey and moist but also fluffy and chewy, and the outside has just the right amount of crispness. Jon and I intended to just buy four donuts, but there were so many enticing choices that we walked out with a six-pack. If you visit the Holy Donut, you must taste the Salted Chocolate donut (which Jon and I fought over), Allen’s Coffee Brandy, and the Orange Creamsicle.

When you visit Maine, you probably wouldn’t think to eat at a BBQ restaurant. Honestly, neither did Jon and I. The only reason Salvage BBQ ended up on our radar is because it was located right next to one of the hotels we stayed at. Thankfully. Their chopped pork sandwich topped with coleslaw and side of mac and cheese was dreamy. Salvage BBQ also offers 17 taps, most of which were Maine microbrews, which is how we discovered Substance IPA from Bissell Brothers. Or, if bourbon is more your taste, they have an extensive selection of bourbon as well. 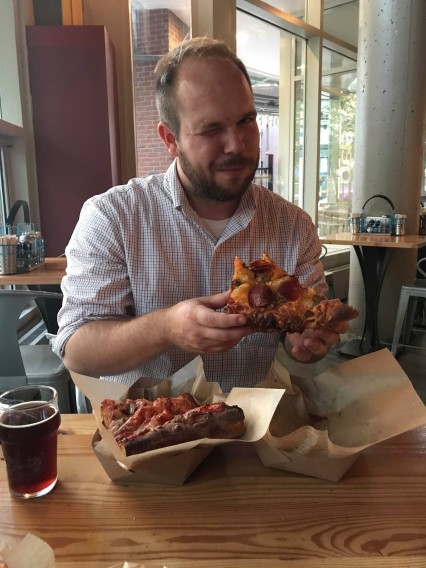 I knew I was going to love Slab the moment I saw the restaurant host; he was wearing a pair of lime green hot pants and singing along to Just a Girl by No Doubt. Also, the slices of pizza were as big as my head. Sorry, I shouldn’t say “slice”; they are referred to as “slabs” and serving sizes are measured in pounds. POUNDS. Be sure to order the Crisps and Dip starter with the White Bean dip and the original slab pizza. And if it’s Sunday…try the Hangover Wedge; who knew potatoes on pizza could be so amazing?

Slab also has an extensive drink list of micro brews and ciders. Jon and I both ordered one hard cider and one IPA. Yes…that dark brown liquid in Jon’s glass is not a stout or a porter or a brown ale. It is an IPA. I want to say it was Doom IPA from Founders (a Michigan brewing company); whatever it was, it was over 12% apv, and it tasted like regret. 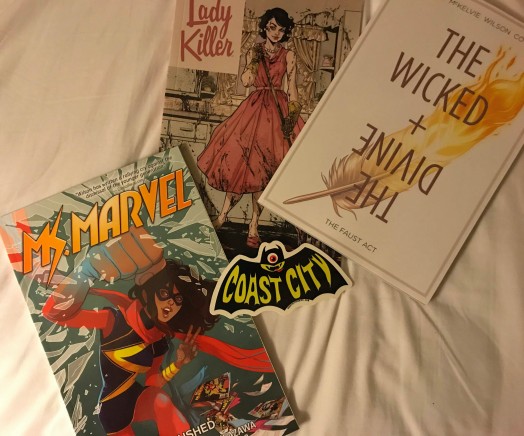 Okay, so we didn’t come to Portland for the nerd culture, but when we found it we were delighted. Coast City Comics had shelves upon shelves of graphic novels, and in the back of the shop, there were several pinball machines waiting for us to spend our quarters. We spent an afternoon here playing games, browsing through graphic novels to add to our collection, and picking out t-shirts featuring artwork from local artists.

It’s been over a year since Jon and I took the much-needed, week-long vacation to Portland, Maine, and not a month goes by where I don’t think about it. It was probably the best vacation I’ve ever taken, and the only reason we ended up there is because airfare to Maine was the cheapest, ha! It is the vacation I measure all future vacations against (which actually kind of sucks because I didn’t anticipate booking THE BEST VACATION EVER on my first try). I think that had less to do with me though and more to do with how incredible the city is.

Our vacation to Portland also encouraged us to set the life goal of visiting every state in the U.S. for vacation. Pre-baby, we had set our sights on visiting Montana or Massachusetts or Alaska next, but now I think we will stay a little closer to home (Ohio? Wisconsin? Indiana?) until Oliver is a little older and won’t wail on airplanes.

What is your favorite vacation experience? Have you ever visited Maine? What are some places you would love to visit for vacation?

2 replies to Visiting Maine with my Main Squeeze