There is something so delightfully tacky about the book covers for cozy mystery novels. I especially love the book covers that have a beautifully illustrated background but then have other elements from the novel (say, books, a cat, a bicycle) photoshopped in from what I assume are stock photographs. They remind me of the hidden object games I became obsessed with my final year at college when I was avoiding attending my business law lectures. The textures seem a little off, but I find the book covers endearing and comforting, and this is probably why I couldn’t resist purchasing a copy of Murder in the Mystery Suite by Ellery Adams. Either that or it was the cat on the cover. I’m 100% more likely to pick up your cozy mystery novel if there is a cat on the cover as demonstrated here, here, here, here, here, and here. 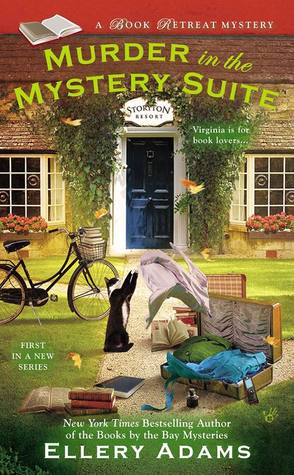 Murder in the Mystery Suite (A Book Retreat Mystery, #1) by Ellery Adams

Tucked away in the rolling hills of rural western Virginia is the storybook resort of Storyton Hall, catering to book lovers who want to get away from it all. To increase her number of bookings, resort manager Jane Steward has decided to host a Murder and Mayhem week so that fans of the mystery genre can gather together for some role-playing and fantasy crime solving.

But when the winner of the scavenger hunt, Felix Hampden, is found dead in the Mystery Suite, and the valuable book he won as his prize is missing, Jane realizes one of her guests is an actual murderer. Amid a resort full of fake detectives, Jane is bound and determined to find a real-life killer. There’s no room for error as Jane tries to unlock this mystery before another vacancy opens up…

It’s easy for cozy mysteries to become formulaic. Typically, the main character is a female, who is thrown out in to the world on her own after a recent divorce/break up with her boyfriend/death of her husband. She’s still getting used to life on her own, but luckily she has been able to turn her hobby into a career, so she has a distraction as she navigates her grief. Then, someone dies in or around her business, and she’s thrust into a situation where she has to figure out whodunnit.

Murder in the Mystery Suite had several of those elements, but then Jane, our heroine, discovers a family secret hidden within the walls of Storyton Hall that sets this novel apart from the rest of the cozies. What I thought was going to be my typical cozy mystery ended up having more action and adventure than usual complete with secret agents, a little bit of espionage, hidden rooms, and blow dart guns. Murder in the Mystery Suite was probably one of the most thrilling cozies I’ve ever read!

There were some inconsistencies, like the fact that this story takes place in rural Virginia, but all of the characters seemed prim and proper; I kept thinking the story took place in England. Also, Storyton Hall is initially described as falling on hard times, and yet the resort was able to invest enough money for a week-long Murder & Mayhem themed program complete with costume parties, multi-course gourmet meals, and Rolls Royce town cars to pick up attendees. If readers can look past that, Murder in the Mystery Suite promises readers a fun and engaging whodunnit. Mystery novel nerds will especially love all of the literary references made throughout the story!

Overall, I enjoyed this novel, and I look forward to picking up the second book in this series, Murder in the Paperback Parlor, in which Jane plans a romance novel themed week for Valentine’s Day.

2 thoughts on “Murder in the Mystery Suite Book Review”