Angus, Thongs, and Full-Frontal Snogging by Louise Rennison is so old that I remember seeing it at my elementary book fair…nearly twenty years ago. I also remember wanting to buy the book, but I was too embarrassed because the word “thong” was in the title, so I picked up something more prudent instead. It wouldn’t be for another two years before I had the courage to pluck Angus, Thongs, and Full-Frontal snogging from the shelf at a Barnes & Noble bookstore.

On the ride home, I read excerpts out loud to my mom about Georgia Nicholson dressing up as a green olive for a costume party followed by excerpts about Georgia accidentally shaving off one of her eyebrows, which made her look really surprised in one eye. My mom nearly had to pull the car over because she laughed so hard her eyes filled with tears.

During a recent library visit, I spied this book on a shelf, and I wondered if it was still as funny after all of these years. I’m not much of a reader, unless it’s Harry Potter, but I could resist. I brought this book home…and devoured it in one sitting.

There are six things very wrong with my life:

1. I have one of those under-the-skin spots that will never come to a head but lurk in a red way for the next two years.

3. I have a three-year-old sister who may have peed somewhere in my room.

4. In fourteen days the summer hols will be over and then it will be back to Stalag 14 and Oberfuhrer Frau Simpson and her bunch of sadistic teachers.

5. I am very ugly and need to go into an ugly home.

6. I went to a party dressed as a stuffed olive.
In this wildly funny journal of a year in the life of Georgia Nicolson, British author Louise Rennison has perfectly captured the soaring joys and bottomless angst of being a teenager. In the spirit of Bridget Jones’s Diary, this fresh, irreverent, and simply hilarious book will leave you laughing out loud. As Georgia would say, it’s “Fabbity fab fab!”

Indeed, Angus, Thongs, and Full-Frontal Snogging is still hilarious, in the laugh-out-loud sort of way, after all of these years. It’s also entirely possible that Georgia Nicholson is one of my absolute favorite characters ever written. Okay, so she is sometimes selfish and a total snot to her friend, but she is also brave and vibrant, and she goes after what she wants (whether it’s Robbie the Sex God or Dave the Laugh or Masimo). Plus, Georgia has such a strong and memorable voice. 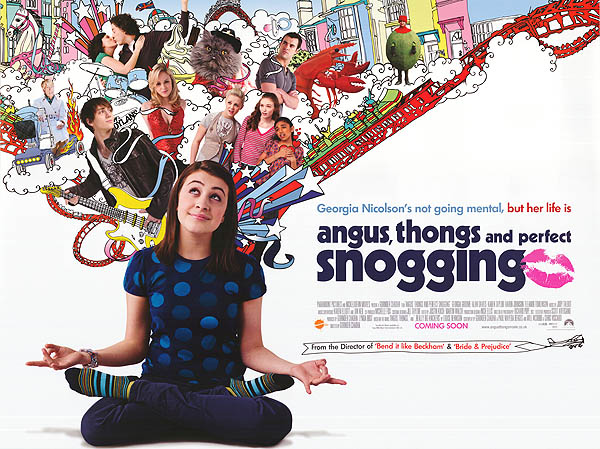 After finishing the book, I immediately settled down to watch the movie adaptation on Netflix. If my memory serves me, the film is actually an adaptation of the first two novels in the Confessions of Georgia Nicholson series. It was such a fun little movie, and I just loafed on the couch wearing a cheesy grin and giggling. Although, Robbie was not how I pictured him. The movie version of Robbie the Sex God had such a feminine sounding voice, which was really weird.

Also, I don’t recall if I thought about this as a teenager, but I certainly did during my recent re-read– I was kind of disturbed by the relationship between Georgia and Robbie. In the book, Georgia is only 14 but Robbie is just about to turn 18, and I found that to be totally creepy. (The film closed the age gap, so it didn’t bother me as much.)

Have you ever read Angus, Thongs, and Full-Frontal Snogging? Have kids these days heard of this series? (I mean, I have to suspect that they have because my teeny tiny local library has the series…)