I may have over-committed myself this October. I had these grand plans to devour a collection of spooky novels and write all about them, but instead I found myself in a bit of a reading rut after abandoning three books back to back to back. I can’t decide if the books were particularly uninteresting to me or if I was just distracted. I did, after all, get married this month (more on that later though!). When I finally sat down to read The Survivor’s Guide to Family Happiness by Maddie Dawson, I was certain my reading rut would affect my ability to appreciate the story. Sometimes negativity begets negativity, you know? But, that’s not what happened. In truth, I actually kind of loved The Survivor’s Guide to Family Happiness. 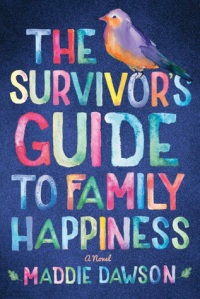 The Survivor’s Guide to Family Happiness by Maddie Dawson

Newly orphaned, recently divorced, and semiadrift, Nina Popkin is on a search for her birth mother. She’s spent her life looking into strangers’ faces, fantasizing they’re related to her, and now, at thirty-five, she’s ready for answers.

Meanwhile, the last thing Lindy McIntyre wants is someone like Nina bursting into her life, announcing that they’re sisters and campaigning to track down their mother. She’s too busy with her successful salon, three children, beautiful home, and…oh yes, some pesky little anxiety attacks.

But Nina is determined to reassemble her birth family. Her search turns up Phoebe Mullen, a guarded, hard-talking woman convinced she has nothing to offer. Gradually sharing stories and secrets, the three women make for a messy, unpredictable family that looks nothing like Nina pictured…but may be exactly what she needs. Nina’s moving, ridiculous, tragic, and transcendent journey becomes a love story proving that real family has nothing to do with DNA.

It is entirely possible that Maddie Dawson’s cast of characters are my favorite for the year of 2016. They’re so…believably flawed. Nina Popkin is impulsive and a bit flaky as she mourns over the death of her adoptive mother, navigates a new relationship following a recent divorce that she’s not quite over, and tries her hand at parenting even though she’s convinced she is not capable of such a feat considering her biological mother abandoned her when she was an infant. Then, there is Lindy, Nina’s sister, who has a perfect life, or at least tries to portray she has a perfect life; she may have a successful business, great hair, and a coach purse, but she’s never felt more disconnected from her husband, and she has a disorder that compels her to count things, like the tiles between her chair and the door, and dear god, please let there be an odd number of tiles because odd numbers are lucky. The relationship between Nina and Lindy is strained at first because after 30+ years of existence, they just found out they are biological siblings, and while impulsive Nina wants everything to do with her biological family, prim and proper Lindy doesn’t appreciate the black mark on her birth record. However, through the course of the novel, Nina and Lindy grow from strangers to sisters, and it’s really kind of heart-warming.

Of course I can’t forget to mention Carter, Nina’s dreamy new boyfriend, who is about 20 years older than she is and kind of a distracted parent. His wife left him, and then she followed her dream of becoming a kale farmer (do people really dream of becoming kale farmers?). She left behind her daughter Kayla, who is a 15 year-old with blue hair and is hella angsty. But, Kayla’s got a heart of gold, she’s compassionate, and when it comes to animal rights, she is proud to take a stand (even if her methods leads to madness). She also left behind a son, who is graduating the top of his class but has zero interest in attending college even though he was accepted into freaking Vanderbilt.

And by the way, Lindy and Nina’s biological mom is now a chain-smoking vegan, who used to be a 1980’s pop icon. But…attaining dreams of stardom is not why she put her babies up for adoption. The true story is much more twisted and devastating.

The Survivor’s Guide to Family Happiness was just the book to pull me out of a reading rut. Dawson writes a character-driven story that is both dramatic and heart-warming, and her characters are well-crafted with impeccable chemistry. It’s hard not to root for them, to hope everything turns out better than alright.