How Does a Flying Goat Dance? | Little is Left to Tell by Steven Hendricks 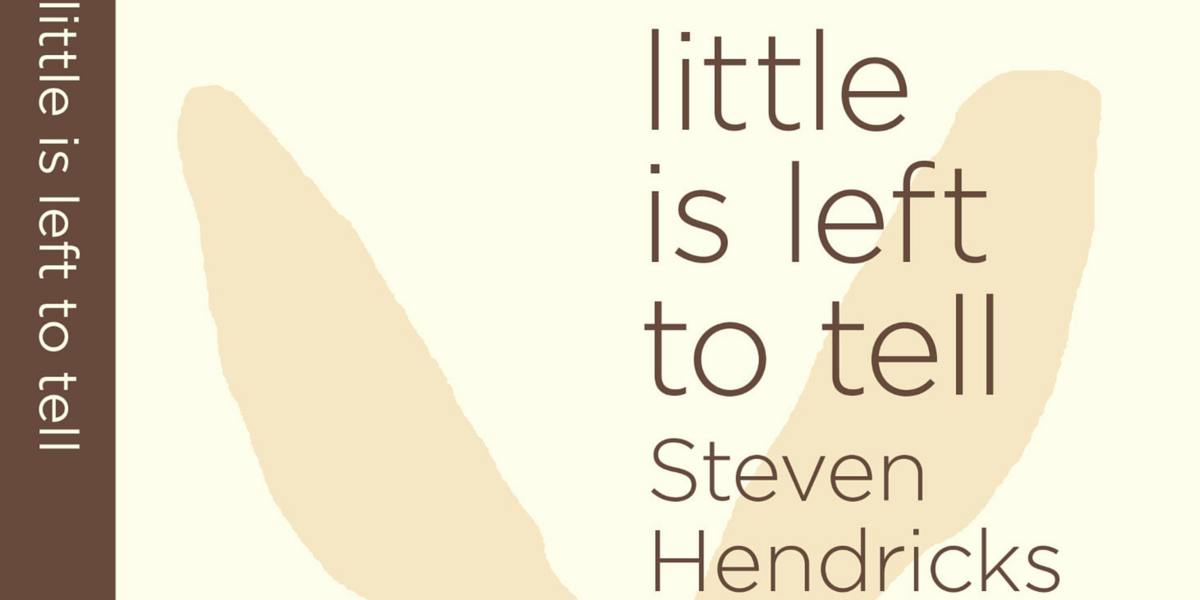 I sense that reviews for Little is Left to Tell by Steven Hendricks are going to be…quite polar. There will be readers who grant this novel copious amounts of stars for its beautifully written prose. For being challenging and complex. For being a masterful blend of reality and the surreal. Then, there will be readers who just leave the stars on the table as they stare at a blank screen thinking, “What the hell did I just read?” and “I don’t have any words to express what I’ve just experienced because the rabbit named Hart Crane ate them all.” Folks…I am the latter.

Little is Left to Tell by Steven Hendricks

Readers enter a narrative rabbit hole through bedtime stories that Mr. Fin, a man with dementia, conjures for his long-lost son. Virginia the Wolf writes her last novel to lure her daughter home. A rabbit named Hart Crane must eat words to speak, while passing zeppelins drop bombs. Mr. Fin tries to read the past in marginalia and to rebuild his son from boat parts. The haunting fables in this lyrical first novel trace the fictions that make and unmake us.

Little is Left to Tell is disorienting.

And it is intentional. The novel starts with a few peaceful paragraphs about a bunny family. But then the bombs drop, and the bunny children are separated from their mother, and the eldest brother dies (I think?). After trying to find shelter and food, the bunny children are saved by their mother and Hart Crane and a dirigible just before starvation. There really is no context to the beginning of the bunny story, and maybe that’s the point because then, out of nowhere, the reader meets Mr.Fin, who is putzing around in his garage and building a boat; he is the main character of Little is Left to Tell, and he is very much a human, who is suffering from dementia.

The story flip-flops between glimpses of Mr. Fin in reality and surreal bedtime stories.

The reader sees him grieving over the loss of his son David or trying to remember the name of the lady who brings him pears in a basket and invites him to tea or building a boat or losing his independence; in between these scenes, he regresses into the bedtime stories he used to tell his son (or how he remembers them now, anyway). The stories become his escape. Or his reality. Perhaps a bit of both, really.

I enjoyed reading about Mr. Fin and his neighbor, Vivian. The characters truly came alive for me, and the scenes they were in were often times heart-wrenching. But, these scenes were brief, and while I wish I could have spent more time with them, I was instead flung in to this bizarre and demented storytime world with bunnies and bears and Don Quixote and Orpheus and Eurydice (and a bunch of other literary or animal characters). To me it was like walking into the Modern Art wing at the Art Institute of Chicago without any context, understanding that what I’m looking at has artistic merit, but not understanding the entirety of the message the artist was trying to convey. I mean, if you get Salvador Dali and Max Ernst then maybe you are the reader to give this book all the stars. I, on the other hand, felt like I only had a basic understanding of the story. It just seemed that there were so many other layers, but in the end I was overwhelmed, and I was left feeling like a numbskull (note: I mostly feel that way standing in the Contemporary Art wing, too).

After finishing Little is Left to Tell, I sought out the audiobook preview out of curiosity. I have very little experience with audiobooks (as in, I’ve listened to one of the Harry Potter books on tape, and that was it), but I sensed this story would lend itself well to the format, and I think I am right. After listening to the preview, I wished I had listened to this story instead of read it myself. The language is poetic and the prose has this certain rhythm that I couldn’t get quite right in my head. Plus, it also seems kind of “meta”– listening to a story, which involves the telling of bedtime stories.

If you haven’t noticed, I didn’t rate this book. I don’t even know how to. It’s not like I read the book and either liked or disliked it. I experienced this book, and I have no idea how to even quantify it. I think what this comes down to is would I recommend this book or not, and the answer is yes. But…not to everyone. I can’t actually think of a single person that I currently know that I would pass this book along to. Perhaps it is something I would have passed along to a friend at college though. Some literary sort, keen on experimental writing, surrealism, and discussing the difference between magical realism and fabulism.

I received a copy of this book for free in exchange for an honest review; the thoughts are ever my own.

← Five Reasons Why You Should Read Ms Marvel, Vol. 2: Generation Why
A Recent Book Breakup | Soulless by Gail Carriger →

5 Comments on “How Does a Flying Goat Dance? | Little is Left to Tell by Steven Hendricks”