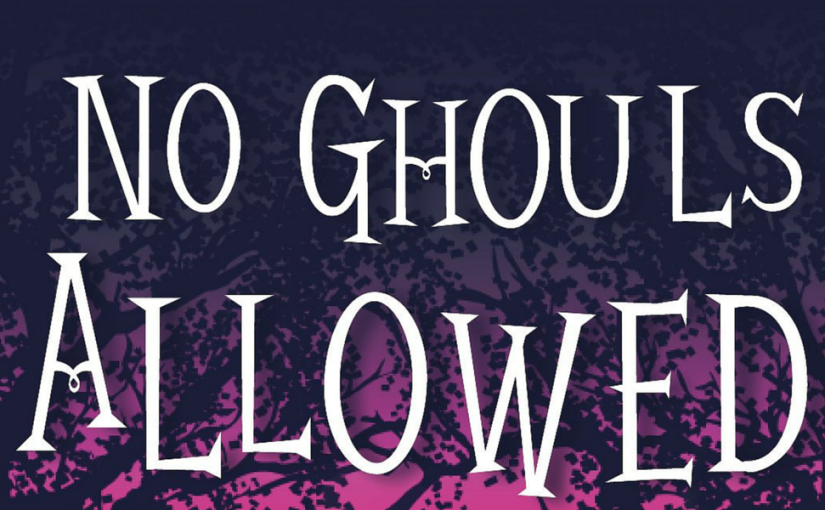 Last year, I read Ghouls, Ghouls, Ghouls (Ghost Hunter Mystery #5) by Victoria Laurie, and I loved it. I loved it so much that I finished the book in one sitting, which I haven’t done since high school. The pacing was perfect. The spooks were terrifying. The chemistry between main character MJ, and her team member, Heath, was delicious. And the writing was atmospheric. Plus, it helps that the story took place in Ireland. When I picked up No Ghouls Allowed (Ghost Hunter Mystery #9), I thought I was going to be in for another treat and binge-reading session. Unfortunately…I was mistaken. 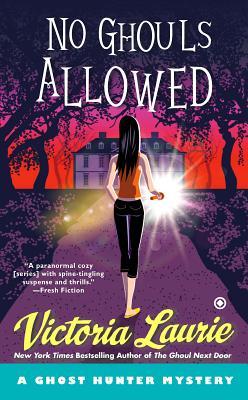 M.J. has had a distant relationship with her father since her mother died more than two decades ago. But when M.J., her boyfriend, Heath, and BFF, Gilley, take a break from their show, Ghoul Getters, and visit her family home in Valdosta, Georgia, they find Montgomery Holliday a changed man. The source of his happiness seems to be his new fiancée, the charming Christine Bigelow.

But despite the blush of new love, Montgomery and Christine are dealing with a big problem in the form of the antebellum mansion she is having renovated. After a series of strange accidents, the work crew is convinced the place is cursed, and the contractor has walked off the job. At Christine’s request, M.J. and her pals agree to find out if they’re really dealing with some spirited saboteurs and a possessed plantation home.

Where was the atmosphere?

Victoria Laurie created a positively spooky atmosphere in Ghouls, Ghouls, Ghouls. The weather was drizzly and overcast, old abandoned Irish castles were trapped in sheaths of fog, and it just screamed ghost story. The same could not be said for No Ghouls Allowed, which takes place in Valdosta, Georgia. She gives us old plantation houses, oak trees dripping in Spanish moss, and exaggerated southern accents, but that’s it. Perhaps I’m being too hard on Laurie? But I used to live in Georgia, and to me it has a distinct and vivid atmosphere.

I remember hot summers with humidity thicker than ectoplasm and pavement that would scorch bare feet. Retreating to the shaded woods filled with tall, skinny pine trees towering over brown, dried needles that sneaked into sandals and running shoes. Ignoring parents’ fears of water moccasins while wading through the creek to get to the lake, picking up discarded skeletons of crawdaddies like seashells along the way. The perimeter of the lake bed so parched that the earth cracked into the shape of stop signs. Strange how nobody considered the water moccasins in the lake…

I remember summer rainstorms with tornado sirens and thunder booms that rattled cracks into the foundations of our homes that the kudzu tried to hide and jumping in red clay puddles after the storm had cleared, leaving red foot prints on freshly cleaned carpet that the kudzu couldn’t hide.

I remember the service at Mama Ruth’s was slow, but that’s the south for you. They have a great burger and even greater sweet tea, and they used sugar-water rags to wipe table tops clean, which left them sticky instead.

I thought the chemistry between MJ and Heath was wonderful in Ghouls, Ghouls, Ghouls. They’re not in a relationship at that point, so the tension is so thick you could cut it with a knife. By book 9, the two are an established couple, and it just felt…weird. Mostly because MJ, also the narrator, kept saying things like, “My sweetie said…” or “My sweetie looked handsome as ever” or “My perfect man muffin turned around”. Okay, okay, so I made up that last one, but you get the point. It was too saccharine for me, and I felt like if we saw the chemistry between MJ and Heath the way we did in book 5, constantly referring to him as “my sweetie” would be unnecessary.

The pacing was off

A few pages in to Ghouls, Ghouls, Ghouls, the reader is treated to a spine-chilling scene– beyond the thick fog, there is a haunting call for someone named Alex, and the Ghoul Getters quickly realize they are hearing an apparition. From that moment on, its non-stop action as the team explores the abandoned castle for a missing member, escapes the violent spook, and tracks down a treasure-hunter that can explain the curse on the castle. But, in No Ghouls Allowed, there is a lot of back story that explains MJ’s relationship with her distant father, with her deceased mother, and the town she once called home. This may very well be a treat to readers loyal to the Ghost Hunter Mystery series, but it’s disengaging for casual readers of the series like myself because there seems to be a lot of downtime in between the action.

I also thought that, for the amount of time that was spent on backstory, I wasn’t really given enough information to try to connect the dots to solve the mystery myself. Or maybe there was too much information and it muddled the mystery. Either way, I didn’t feel as satisfied by the big reveal like I did in Ghouls, Ghouls, Ghouls.

But, that could be because the motive made me feel all squidgy

This is kind of spoilery, but know that this story deals with sexual abuse, which really caught me off guard in a cozy mystery novel. Not that the details were ever explicit, but it was no less revolting. I really struggled to read the end of the book.

That being said, Laurie creates yet another Grade-A spook!

Dare it say it, No Ghouls Allowed had a more terrifying spook than Ghouls, Ghouls, Ghouls. It’s not confined to just one house, so it torments so many people in this novel. We’re talking possession and attempted murder and losing time and Ouija boards and out-of-body experiences and a hundred slamming doors. This is where Laurie’s writing exceeds expectations, and I was wholly absorbed once I started reading these haunting parts of the novel.

He’s one of the Ghoul Getters, and he’s MJ’s BFF4E. He’s probably my favorite character in the series, and every time I read about him, I can’t help but picture a more flamboyant Cameron from Modern Family in my head. I also loved reading about he and his mother; their dynamic was exceptional!

Even though I didn’t love No Ghouls Allowed (three stars, which isn’t shabby at all, actually) as much as I loved Ghouls, Ghouls, Ghouls (four stars), I’m still really enjoying this series even though I’m totally reading it out of order. I actually want to get back to the roots of MJ and the Ghoul Getters and read the first few books in the series– especially Ghouls Just Want to Have Fun (#3) and Ghouls Gone Wild (#4), because these are the books when MJ’s ghost hunting reality show launches. I think that would be pretty fun to read because I used to be totally obsessed with ghost hunting shows back in the day.