I’m Disappointed…That it Took Me So Long to Read This Book! | The Lightning Thief by Rick Riordan

There were two reasons why I didn’t read Percy Jackson the Lightning Thief by Rick Riordan when it was released:

So, I’m not sure why, at the age of 27, I felt compelled to buy this middle grade novel (other than, it was on sale, and I’m notoriously impulsive when it comes to buying and borrowing books). Once I brought the book home with me, it spent a few months sitting on the floor beside my bed before I even considered actually reading it. It was because of mentions on two blogs, Reviews and Cake and J.Bookish, that I took as a sign and decided to finally give the book a read. Right from chapter one, I was totally engrossed in The Lightning Thief. Normally I can’t read in bed because I get drowsy really quickly, but this book had me thinking just one more chapter before lights out, and before I knew it, the clock read midnight. I even read this book with the teevee on, and I wasn’t distracted at all.

Greek mythology for the win!

Had this series existed when I was in elementary school or in middle school, I would have devoured it because mythology was one of my favorite units to learn during school. The gods and goddesses and mythical beasts all had distinct personalities and characteristics, and I had so much fun trying to figure out who everyone was before their identity was revealed. I especially loved Hades and Charon. The portrayal of the Underworld as a whole was tinged with black comedy, which I may have missed as a youngster, but I definitely appreciated it in adulthood.

The excitement starts right in chapter one and it does. not. stop. This book is flush with action and mystery and twists that I never saw coming. You know those lists of books recommended to “reluctant readers”? Percy Jackson the Lightning Thief would be at the tippy-top.

An interesting spin on the boarding school trope

Boarding schools are not common in America, so I never read a book that took place in a boarding school until Harry Potter. Of course I love stories that take place in boarding school, but bookshelves became over saturated with this setting afterward. Instead of a boarding school, Percy Jackson attends a summer camp for demi-gods– Camp Half-Blood. It made me feel nostalgic for Girl Scout Camp, which I attended the summer after third grade; camp leaders somehow disguise learning as fun.

Relief that the characters were not immature

I received a couple of warnings from older Rick Riordan fans that because the Lightning Thief was a middle grade novel, Percy Jackson and Co. had a tendency to be immature, but I didn’t find that to be true, really. I don’t often read middle grade books, so it’s hard for me to compare the maturity of characters in these books, but I do recall thinking that the characters in Michael Buckley’s Fairy-Tale Detectives were immature (although, I still really enjoyed that book). They were whiney and impulsive, which I’m sure I was when I was eleven too. But, I’m not eleven anymore, so understand that I have to work hard to put that into perspective. I did not experience that with the Lightning Thief though.

ADHD as a source of strength

Considering how often children are diagnosed with ADHD in America (or so I’m told), I’m surprised by how few books there are where characters have ADHD. I just Googled “Middle grade novels about ADHD” and nothing came up. Try that with “Middle grade novels about autism” and you’ll get an entire page of results. The only book that comes to mind is Joey Pigza Swallowed the Key by Jack Gantos, which was a popular read back when I was in elementary school. It was an excellent book and the voice of Joey Pigza was strong, but when I read this book during a children’s literature course at college, I found myself overwhelmed and exhausted by the intensity and chaos of it all. That is not how ADHD is portrayed in the Lightning Thief though. Instead of it being something negative, the ADHD is a source of strength for Percy Jackson and Co.; it helps them become a tour de force as they battle their way through monsters.

Upon completing the Lightning Thief, I knew, without a doubt, I would be continuing this series. I’ve heard it’s a bit formulaic, but I think it will still be worth the read. I want to see Percy grow in to a power house. I want to see what “Percabeth” is all about. I want to see more Greek gods and goddesses! I want to go to the bookstore to buy the rest of this series!

Do you read middle-grade novels? What are some of your favorites? 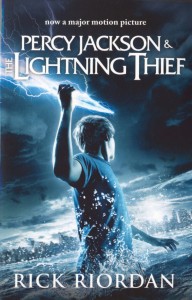 Released: January 2005
Publisher: Disney Hyperion Books
Add to Goodreads
★★★★★
Synopsis: Percy Jackson is a good kid, but he can’t seem to focus on his schoolwork or control his temper. And lately, being away at boarding school is only getting worse—Percy could have sworn his pre-algebra teacher turned into a monster and tried to kill him. When Percy’s mom finds out, she knows it’s time that he knew the truth about where he came from, and that he go to the one place he’ll be safe. She sends Percy to Camp Half Blood, a summer camp for demigods (on Long Island), where he learns that the father he never knew is Poseidon, God of the Sea. Soon a mystery unfolds and together with his friends—one a satyr and the other the demigod daughter of Athena—Percy sets out on a quest across the United States to reach the gates of the Underworld (located in a recording studio in Hollywood) and prevent a catastrophic war between the gods.

← At Least They Didn’t Die of Dysentery? | The Indifferent Stars Above by Daniel James Brown
Wandering Through Chicago →

7 Comments on “I’m Disappointed…That it Took Me So Long to Read This Book! | The Lightning Thief by Rick Riordan”