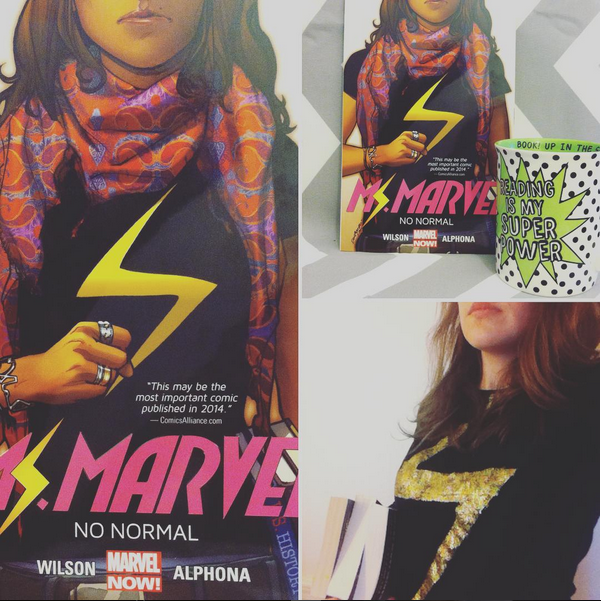 Released: October 2014
Publisher: Marvel
Age Group: Young Adult
Add to Goodreads
★★★★★
Synopsis: Kamala Khan is an ordinary girl from Jersey City — until she’s suddenly empowered with extraordinary gifts. But who truly is the new Ms. Marvel? Teenager? Muslim? Inhuman? Find out as she takes the Marvel Universe by storm! When Kamala discovers the dangers of her newfound powers, she unlocks a secret behind them, as well. Is Kamala ready to wield these immense new gifts? Or will the weight of the legacy before her be too much to bear? Kamala has no idea, either. But she’s comin’ for you, Jersey!

Ms Marvel is the first graphic novel I’ve ever purchased, and the reason I pulled it from the shelf is entirely superficial– the cover. I mean, look at it! It’s intense and powerful. If that was any indication of the story inside, how could I resist? And I definitely wasn’t disappointed. First, the artwork was stunning and the colors were bold;  I’ve only read a handful of graphic novels, but the artwork of Adrian Alphona is my favorite yet. Second, Kamala Khan is a powerhouse. I mean, obviously– she is Ms Marvel. But even when she’s not a super hero, she’s still strong. She’s insistent on experiencing teenage-hood despite over-protective parents and the fact that teenage-hood is an absolutely terrifying time. Also, while she seems shy and awkward, she is also unapologetically her own person (and unapologetically geeky!) even though sometimes she’s still trying figure out who that is. Finally, Ms Marvel: No Normal is a thought-provoking story because it challenges a lot of our social norms– what is considered beautiful, who can be considered a hero, what it means to be American. Kamala Khan may start out transforming into a Carol Danvers look-a-like, but soon she realizes Ms Marvel doesn’t have to be a blonde-haired, white woman as she becomes more confident in herself and her identity.

If you pick up one graphic novel to read this year, it definitely needs to be this one. I’m still trying to get my hands on Vol 2: Generation Why but my local bookstores never seem to have it in stock!

Have you read any of the Ms Marvel comics featuring Kamala Khan? What did you think of them?

← A Stack of Spooky Books
Halt You Villains! Unhand That Review! Nimona by Noelle Stevenson →

9 Comments on “This is Another Five Star Review: Ms Marvel, Vol 1: No Normal by G. Willow Wilson & Adrian Alphona”