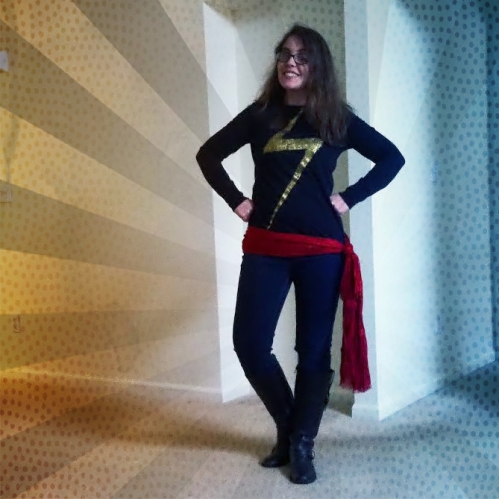 About mid-way through last week, I received a text message from one of my very best friends from high school, inviting me to participate in Trunk or Treat. It’s been ages since we hung out, so I jumped at the opportunity. She told me our group would be dressing up as superheroes, so I spent the morning before the event creating a Ms Marvel costume. I’ve never been particularly crafty, so I was pleased with the finished product. The Trunk or Treat event was alright. It’s was actually overwhelming for an introvert like me. It was c-c-c-cold and snowy outside, so we were stuffed inside the gym with a lot of people. Later on in the night, I heard that over 1,000 people shuffled through.

The materials were inexpensive, and you may even have most of them lying around anyway. The most challenging part of this project was creating the lightning bolt stencil, which I attempted to free-hand with the edge of books and a three-hole punch (because I haven’t owned a ruler since grade school). Next, I had to pluck up the courage to paint it onto my shirt– I had no idea if my lightning bolt was even, and I had no idea what the paint would look like applied to the shirt. I ended up buying two t-shirts just in case I ruined the first one, but luckily I did not need it!

It’s been a really long time since I created something with my hands, so I felt accomplished afterward. I also have some new additions to my wardrobe after this (yes mom, I plan to wear my glitter-bolt shirt in public.) I’ve also already started scoping out other characters because…this project was so much fun, and I kind of want to create more. 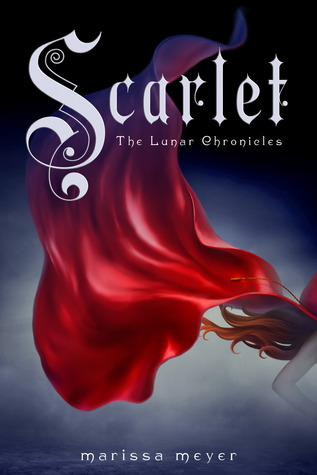 While everyone is finishing up Cress by Marissa Meyer, I just snagged myself a copy of Scarlet. I absolutely adored Cinder, so I can’t really explain why it’s taken me so long to continue the series. Unfortunately, I’m not in the mood for this sci-fi retelling of fairy tales. Most of the books I’ve read recently have been dark or epic or heavy (figuratively AND literally). I think I’m in the mood for something light and fluffy– a feel good novel that will not take long at all to read. Any suggestions?

Books On My Radar

I hope you had a safe and fun Halloween. Did you dress up as anything this year?