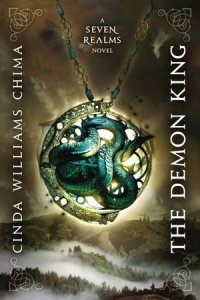 The Demon King by Cinda Williams Chima (Seven Realms #1)
Released: November 2009
Publisher: Hyperion Books
Add to Goodreads
★★★★☆
Synopsis: When 16-year-old Han Alister and his Clan friend Dancer encounter three underage wizards setting fire to the sacred mountain of Hanalea, he has no idea that this event will precipitate a cascade of disasters that will threaten everything he cares about. Han’s life is complicated enough. He’s the former streetlord of the Raggers—a street gang in the city of Fellsmarch. His street name, Cuffs, comes from the mysterious silver bracelets he’s worn all his life—cuffs that are impossible to take off. Now Han’s working odd jobs, helping to support his family, and doing his best to leave his old life behind. Events conspire against him, however. When members of a rival gang start dying, Han naturally gets the blame.

Meanwhile, Princess Raisa ana’Marianna has her own battles to fight. As heir to the Gray Wolf throne of the Fells, she’s just spent three years of relative freedom with her father’s family at Demonai Camp—riding, hunting, and working the famous Clan markets. Now court life in Fellsmarch pinches like a pair of too-small shoes.

Wars are raging to the south, and threaten to spread into the high country. After a long period of quiet, the power of the Wizard Council is once again growing. The people of the Fells are starving and close to rebellion. Now more than ever, there’s a need for a strong queen. But Raisa’s mother Queen Marianna is weak and distracted by the handsome Gavan Bayar, High Wizard of the Fells. Raisa feels like a cage is closing around her—and an arranged marriage and eroded inheritance is the least of it.

I love fantasy movies, but fantasy novels? Not so much. I like books that are character-driven, and it would seem that the majority of fantasy novels I’ve read are the antithesis of that. I can appreciate exquisite world building just as much as the next person, but that won’t keep my attention for long unless I fall in love with the characters. But, I’m happy to say The Demon King by Cinda Williams Chima kept me enthralled from start to finish.

I loved the characters in this book. Even though they were a tad archetypal, their attitudes, their motives, their personalities were refreshing. First there is Han “Cuffs” Allister. If ever there was a male protagonist to make me swoon, Han is that character. And apparently he makes several of the ladies in the Seven Realms swoon too. He’s handsome. He’s cunning. He’s mysterious (just what are those cuffs he’s worn since he was a babe, and why won’t anyone let him take them off?). He’s also reformed! He used to spend his days as one of the most feared street lords (see: thief). But, it caused his mother and sister too much grief, so he put his life of crime behind him (d’awww). But, just try convincing rival street gangs and local law enforcement. Even though he’s been “clean”, he’s always finding himself in trouble. Or is trouble always finding him?

Then there is Princess Raisa. I thought she was going to be another stuck up princess in a poofy gown, but this girl has an admirable strength within her that we only begin to see in book one. She’s the kind of female protagonist who gets to get her hands dirty AND she gets to wear the most luxurious gowns. She doesn’t have so sacrifice femininity for strength, and I love that about Raisa. Her mind is more preoccupied about living life among her kin in Marisa Pines (a place of common folk, naturalists, and Demonai warriors) than living in her royal court. She’s more interested in military affairs than debutante balls. And she’s more interested in playing the field than settling down with one suitor (because, you know, she just turned 16, which is the age that most ladies get married off); this especially is refreshing.

Chima also creates some deliciously evil characters. They’re the types of people who use their status and power to strike fear into the hearts of others. They also harbor a mysterious, magical power that was thought to have been banned centuries ago, and they’re now using it to their advantage. But, their true motive has yet to be revealed, and I’m dying to know. And on top of that, Chima kind of blurs the lines between evil and misguided. One moment you’re thinking “burn him at the stake!”, and the next minute you’re thinking, “Awww, now my heart is crying for him”. You’re toying with my emotions Cinda Williams Chima! And it feels so right.

I could prattle on about how great Chima’s world building skills are, but that would take forever. So, I’m thinking you’re going to have to take my word on it. The world building in The Demon King was exquisite. From the vivid descriptions of the locations in the Seven Realms to the hierarchies and the every-day-life of the societies in the Seven Realms, Chima wins at world building. Oh, that’s not to forget the conflicts between the realms or the conflicts between the different social groups. Or the religion or the way magic works. With any book that includes world building, some slow spots in pacing can be expected, but I wasn’t as bothered by it as I thought I would. I love the characters and the action that are in the book, but I also loved reading about the different realms and the folktale that lends its name to the title of the book. Chima’s work was truly wonderful.

Overall,
I loved this book. I loved this book! And, I am very lucky that I have the next few books in the series, so I can dive right into them whenever I want. After the ending (with all it’s plot twists and drama), I’m dying to know what happens next! Read this book if you’ve ever picked up the Lord of the Rings and then put it down and walked away from it half way through the series because you couldn’t take it anymore. The Demon King is written in a way that’s easier to digest for those who are not normally nuts about high fantasy. Chima figured out the perfect balance between character development, plot, and world building, and it opened me up to try out other books in the (high) fantasy genre. Additionally, read if you’re nuts about Bethesda’s Elder Scroll series. (I’m actually mostly kidding about that last one, but I really couldn’t help but notice some similarities between the book and the Elder Scroll games.)