An Indie Pub Novel with Potential | Eve Brenner: Zombie Girl by A. Giacomi

I’m going to start this post with an instant mood killer: This is not the review I wanted to write. I wanted to love this novel. I really did. And here’s the thing, at the very root of it, Eve Brenner: Zombie Girl by A. Giacomi is a good story. It’s action packed, it’s thrilling, it’s not your usual zombie fare. Unfortunately… the execution of the story was unpolished, and that affected my ability to fully enjoy this novel. 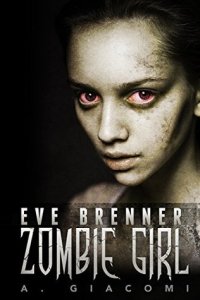 Eve used to be an ordinary girl, from an ordinary town, with ordinary dreams, but her dreams rapidly turn into nightmares when one grave mistake leaves her a little less than human and a lot less average.

Eve’s not quite the same girl she used to be. She desperately clings to her humanity as new desires, new abilities, and new urges take over with each passing day.

Eve Brenner: Zombie Girl is a tale that takes you on an emotional and terrifying journey as Eve struggles to cope with her new life and find a cure for her strange illness before time runs out. She desperately clings to her humanity as she tries to control the monster she knows is lurking inside her.

Turns out living was the easy part.

Eve Brenner: Zombie Girl is New Adult without the smut

I’m reluctant to pick up New Adult fiction because so much of it seems to be about young adults discovering their sexuality. And while I believe there is value in that topic, there is so much more to being 18/19/20 than sex. Eve Brenner: Zombie Girl breaks the NA mold; it takes place in a college setting but it focuses more on friendship and family relationships instead of bombarding readers with sex or romance, and I appreciate that.

This is not your typical zombie fare

First, “patient zero” is a few thousand years old. Sealed away in a sarcophagus in Egypt is not a mummy but a zombie that has been infected by the Azrael Virus. During an anthropological dig, Eve Brenner comes face-to-face with the ancient Egyptian zombie and becomes infected herself. However, instead of becoming mindless, Eve Brenner is very much lucid– she just has preternatural strength and healing abilities, and of course she has an insatiable appetite for braaaaaaaains, which makes attending college and maintaining friendships so much more challenging.

Second, instead of running for their lives, Eve’s friends, Cam and Alex, stay true to their friendship. It’s not always easy though considering Eve could snap at any moment and devour the pair like a couple of steaks. Oh, and of course there was that time when Eve may or may not have accidentally and impulsively eaten Cam’s abusive father. I mean, how do you break that kind of news to someone?

Unfortunately, there seemed to be some inconsistencies surrounding the zombie transformation throughout the course of the novel. Sometimes Eve’s victims are full-fledged mindless zombies, and other times they were capable of making conscious decisions, including raising an army of undead college kids. It’s not really addressed why the Azrael Virus affects victims differently though.

There is also a red stone that was mentioned a few times in the story; it might hold some mysterious power, but nobody knows what it does…yet. Based on how the story ended, I imagine it plays a larger role in the second novel in the saga, although I actually found the red stone to be conflicting with the rest of the story. So much of this novel is rooted in science fiction and then out of nowhere there is this random fantasy element?

When I think of Eve Brenner: Zombie Girl, my immediate thought is, “this book has a lot of potential”. I found the story to be genuinely compelling and exciting, but the storytelling was unpolished and probably could have benefited from another round of critiques and revisions. For example, the story is told from three different perspectives, but their voices are all the same (which is weird considering two of our narrators are female and one of our narrators is male). But even more frustrating was that the setting was so vague!

For a brief time, this story takes place during an anthropological dig in Egypt, which is freaking awesome! But…I don’t know what the dig site looked like. I didn’t get to see the students and professors at work. I didn’t even know what they were searching for! I couldn’t feel the arid climate or blazing sun. I was left wondering what the ancient pyramids looked like against the backdrop of the modern city of Cairo (or wherever they were).  Then, Eve Brenner and Co. arrive back at college, but as far as I can tell, the only students on campus aside from Eve, Cam, and Alex are Cam’s roommate, Mark, and the crazy RA, Claire. There is no hustle-and-bustle of campus life, which should have added so much tension to this story considering Eve’s insatiable appetite.

This is obviously a work of fiction– of science fiction– so “realistic” is kind of an odd word to use in conjunction with a story about zombies. My concern with realism has less to do with zombies (I’m on board with zombies!), and more to do with the reactions of the characters.

Despite my issues with Eve Brenner: Zombie Girl by A. Giacomi, I do recognize it as an imaginative and thrilling story. It was also a unique twist on the zombie story, where instead of being a hungry villain, they do have a conscious and they can be a hero. In the next installation, Eve Brenner teams up with the very team that threatened her and her friends, CSIS, to discover the truth behind the Azrael Virus. Intriguing!

I received a copy of this book for free from the author in exchange for an honest review.

← A Modern Adaptation of a Gothic Classic | The Turning by Francine Prose
Where Have I Been? →

2 Comments on “An Indie Pub Novel with Potential | Eve Brenner: Zombie Girl by A. Giacomi”