Yesterday was a particularly perfect Autumn day that had me jonesing for some spooky literature, so I escaped to the library for a little while and returned home with more books than I am capable of reading in a three-week period (as usual). I …definitely should not have indulged in a library visit since I’m already kind of behind on reading the books with review deadlines, but I couldn’t resist.

Have you read any of these books? 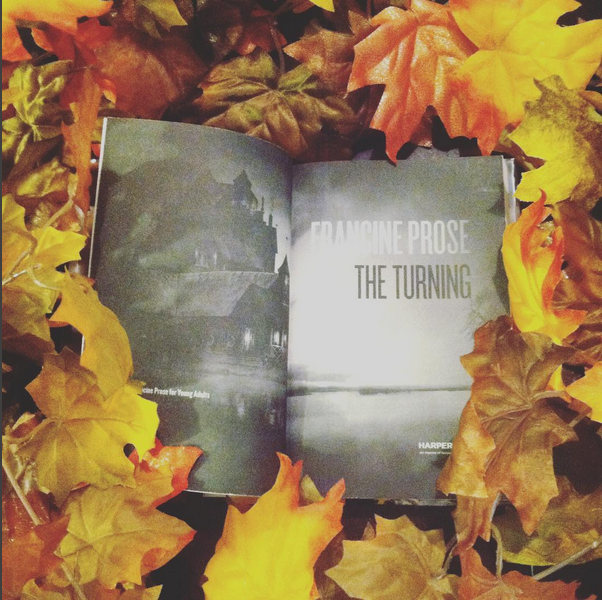 I made the mistake of starting to read the Turning by Francine Prose in the evening, and once the sun finally set, I started to get almost uncomfortably scared. Not scared enough to stop reading, but scared enough that I knew I wouldn’t be going to bed anytime soon because I’d be hyper-alert to all the things that go bump in the night (even though I know those things are definitely just my cat). To make matters worse, Jon fell asleep early, so it was just me sitting alone in the living room. And even though we live in a small apartment and Jon was only 15 steps away from me, and almost all the lights were on, I still managed to scare myself into thinking that something was lurking outside the sliding glass door in the pitch black night staring in at me (because that happened in the book). Nevermind that we live on the third floor, so you know, that’s almost impossible (unless the climbed the tree…which they could have…).

What was the last scary story you read that gave you the heebie-jeebies?

3 replies to I Don’t Deserve These Books!

Okay, so I was going to wait until Friday to release this. But really, I’m just so relieved and excited I finally jumped back in front of the camera and filmed something that I want to share it RIGHT NOW. ⁣
It’s not quite 40 degrees, but I’m standing on my back porch with bare feet anyway, sipping some Chap Hop from @teaspectral . It’s a smoked Lapsang Souchong with a hint of bergamot and vanilla. It’s a perfect blend to keep warm with after my walk to school with Ollie, and as I enjoy the sunlight glittering in dew-covered grass. It’s a good morning. ⁣
Scratchy throats call for @tielkatea Peppermint Leaf sweetened with lemon infused honey 🍯 #tea #teatime #instatea #teastagram #teasofinstagram #teablogger #teadrinker #teaphotography #teagram #teaholic #tielka #pepperminttea #herbaltea #homeremedy #teaoutside
Happy Launch Day to @topazteaco 💙 ⁣
It’s a happy tea mail day, and I don’t know what I’m more excited about: delicious @dessertbydeb blends or this yellow cup and saucer I also bought from her shop 😍. Sipping the Maple Chai Sticky Buns blend right now, but I can’t wait to dive into the rest of the tea tomorrow. Which collection should I dive into first: Little Country Kitchen OR Lady Lavender?
There was a crispness in the air when I woke up, so I thought it was a pumpkin spice kind of morning. But, then I saw the sun stretch golden across lawn and realized it was a Lavender Berry from @topazteaco kind of morning. ⁣
It’s another overcast, Autumn morning, so this time I’ve steeped up some Pumpkin Chai from @fridaytea . We have gloom in forecast until Monday, so I suppose it’s going to be a Chai-every-morning kind of week. #spicedchai #fridayafternoontea #antiqueteacup #vintageteacup #teadrinkersofinstagram #teablogger #blacktea #teastagram #instatea #teacommunity
A gloomy Tuesday morning calls for a comforting mug of S’mores Chai from @davidstea . I used to not like this blend, so I’m uncertain why I even put it in my cart weeks ago. I’m glad I revisited this one though. I still don’t think it tastes like S’mores, but it has this earthy cocoa flavor that I’ve been drawn to this year.⁣
Friday Chai-day on the back porch. (Wait, it is Friday, right?) But only for a hot second before scrambling back inside to the toddler. Have you sipped your first cup of spiced chai for the season yet? #tea #homeisacupoftea #teatime #cupoftheday #teaoftheday #instatea #teastagram #teasofinstagram #teablogger #teadrinker #teaphotography #teaaddict #tealove #tealife #teagram #teaholic #ilovetea #chai #masalachai #spicedchai #teaoutdoors #teadrinkersofinstagram #teacommunity