I think Life got in the way of me enjoying how awesome this past week really should have been. In hindsight, it wasn’t bad, although every day did feel like a Thursday. And, for some reason I hyper-focused on small, irritating details. Like how I couldn’t find my glasses on Monday morning, and I couldn’t figure out if A. I just couldn’t see them because well…I wasn’t wearing my glasses, B. I put them in an unusual spot, or C. my cat was laying on them (on purpose [to spite me] I’m sure). The answer to this riddle was B; they were in the laundry basket??? And this was just how my week went.

This past week, I also found myself increasingly annoyed by the arrogance of my co-workers, prone to cluster headaches behind my left eye, staring at the ceiling from 3AM to 5:30AM; frustrated by all of (my) clerical errors that I found after reviewing the payroll report this week, and stressed as I think about all of the things I needed to get done at work that ended up getting shoved to the side because of other projects. Last week was dead and boring, and suddenly this week the pace picked up and I wasn’t prepared. This happens at the start of every busy season. You would think I would be used to this cycle by now, but I’m not. I’m always running around in a panic for the first few weeks. And worst of all? Had I been in a better headspace, this week would have been awesome.

I received some extra special packages in the mail

Like the What Lifts You Up coloring book package (including two coloring books, chocolates, markers, color pencils, paper straws, and a mug that exudes positive thinking). The chocolate was the first thing I indulged in, and the mint meltaway was exquisite. Then I sprawled out on the floor and colored for an hour (I had to horde my markers because Fargo kept trying to steal them).

I also received more Pique Tea crystals this week, and this carton included a flavor I have yet to try– Jasmine tea!

I ate some extra special food this week

Thursday was Cinco de Mayo, and one of the gals in the office organized a pot luck. I don’t really know why we celebrated Cinco de Mayo since none of us are Mexican, and I’m fairly certain everyone I work with thinks it’s the Mexican Independence Day. Still, the tacos were good, but the bell of the ball was my black bean, bell pepper, corn, and avocado salad with spicy lime-cilantro dressing. My serving dish was scooped clean, and people kept asking me for the recipe. (Also, I’ve never bought or cooked with avocado before, yet I managed to purchase two perfectly ripe ones on my first try, so there is that).

I also tried out this recipe for Coconut Milk Breakfast Quinoa. I had actually purchased a can of coconut milk for the sole purpose of adding it to my Thai Chai since a few fans suggested it on the Adagio website. But, I felt guilty about spending $4.00 just to add a splash of milk to a cup of tea, hence the breakfast quinoa. I discovered that Coconut Milk Breakfast Quinoa is super delicious (but also kind of expensive, so I may try this recipe out with rolled oats instead), and Adagio’s Thai Chai doesn’t need the coconut milk “enhancement”; I think it tastes better without it!

I received an extra special text message from my boss

Most days I feel like an outsider at work, the aloof one in accounting. I’m also the only one in the office that doesn’t get much face time with “the boss”, which is ironic because she was originally hired to be the accounting manager, so it’s really hard for me to gauge how I’m doing. Part of me feels really frustrated because I feel like she doesn’t make time for me because she doesn’t like me. Part of me feels like maybe she doesn’t feel like she needs to make time for me because she has faith in my ability to do my job well. Both are terrifying thoughts to me because I want her to like me and most days I think I suck at my job. So, on Friday, when she sent a text message to me and one of my co-workers, telling us she appreciated all the work we did and that she was happy to have us at work each day, it sort of let me relax and think, “Okay, so maybe things are all right after all”.

I purchased some extra cozy books

What can I say? I just really wanted some light-hearted reads in my life, and I had a couple of dollars on an old Barnes & Noble gift card, so I snagged myself these cozy mysteries: 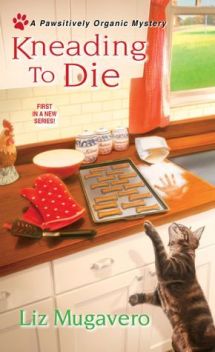 Three of the five books I purchased feature cats on the cover. Need I say more?

How was your week?

9 replies to Life Lately: another exercise in positivity