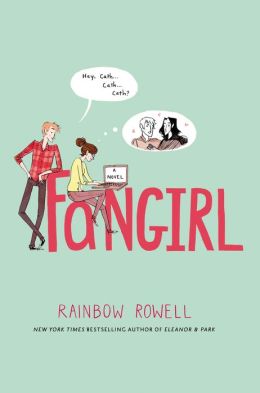 Fangirl by Rainbow Rowell
Released: September 2013
Publisher: St. Martin’s Press
Add to Goodreads
★★★★☆
Synopsis: Cath is a Simon Snow fan. Okay, the whole world is a Simon Snow fan…But for Cath, being a fan is her life—and she’s really good at it. She and her twin sister, Wren, ensconced themselves in the Simon Snow series when they were just kids; it’s what got them through their mother leaving. Reading. Rereading. Hanging out in Simon Snow forums, writing Simon Snow fan fiction, dressing up like the characters for every movie premiere.Cath’s sister has mostly grown away from fandom, but Cath can’t let go. She doesn’t want to. Now that they’re going to college, Wren has told Cath she doesn’t want to be roommates. Cath is on her own, completely outside of her comfort zone. She’s got a surly roommate with a charming, always-around boyfriend, a fiction-writing professor who thinks fan fiction is the end of the civilized world, a handsome classmate who only wants to talk about words… And she can’t stop worrying about her dad, who’s loving and fragile and has never really been alone.For Cath, the question is: Can she do this?

So rare is it that I love a book that has been hyped. Usually, the higher the pedestal, the farther a book has to fall– such was the case with Divergent by Veronica Roth or An Abundance of Katherines by John Green for which there is no link here because I couldn’t make it past page 50. However, I recently read Fangirl by Rainbow Rowell, and the only thing I’m disappointed about is not reading the book sooner so I could fangirl along side the rest of the book blogosphere.

Freshman year of college is a test for all 18 and 19-year-olds, and it’s no different for Cath, who is a new student at the University of Nebraska in Lincoln, Nebraska*. At least she can rely on her twin sister, Wren, also a freshman at the University of Nebraska, to help her navigate the microcosm that is a university campus and being away from home for the first time…right? But, when Wren chooses to embrace the college life that includes the drinking and the boys and the rowdy parties, Cather slips into the fan fiction world of Simon Snow (read: Harry Potter) that’s safe and comfortable and already accepting of her. Unexpectedly, her sassy roommate, Reagan, and her sassy roommate’s attachment/unattachment, Levi, draw Cath out of her shell.

I think Cath is going to be one of those rare female characters who empowers her readers. Like the way Hermione Granger made being intelligent and a bookworm totally awesome, Cath will make reading and writing and being snarky and being nerdy totally awesome. Plus, she’s easy to relate to. She’s cynical and insecure and scared, but she’s also introverted and witty and passionate, and as I kept flipping pages, I kept thinking, “That’s me. Cath is me!”

Then, we’re finally given a love interest that isn’t a “bad boy with a heart of gold” because those don’t actually exist. Trust me, the bad boy will always be a jerk (especially in college), and you’re just being blinded by his manly sideburns and five o’clock shadow. Levi is a nice guy— the kind that offers to walk with you at night even though it’s cold outside because he wants to make sure you feel safe, the kind that will drive you home no matter the distance or the road conditions, the kind that will encourage you to embrace and ramble on about your (nerdy) passions. He’s not compared to Adonis; in fact, he’s got lines in his forehead and a bit of a receding hairline, and he probably has a farmer’s tan too from working hard out in the sun! He’s still handsome and he’s charming (of course, he’s from the midwest), but more importantly, he’s the kind of you guy you cannot wait to see or talk to over the phone because he just sort of makes awful days melt away or he makes you feel like the most important person in the room or he makes you feel like yourself again. I know someone kind of like Levi, and perhaps that is why the relationship that develops between Cath and Levi gives me butterflies in my stomach. Plus, the romance happened organically, which is refreshing in a world of love triangles that don’t make sense and instant, unfettering “love” amongst teenagers.

As much as I loved Fangirl by Rainbow Rowell, I have to admit that I did actually skips parts of this book, which I don’t often do. Each chapter starts with an excerpt from the Simon Snow novel, or Cath’s fan fiction, or newspaper clippings discussing the pop culture phenomenon. Then, there were several pages where Cath was reading her fan fiction out loud, and I pretty much skipped all of that. The integration of Cath’s Simon Snow fan fiction was cool at first, but after a while I became bored by it, and I felt it was distracting from the story that I truly wanted to read– Cath’s college experience.

Still, Fangirl by Rainbow Rowell earns a solid four stars from me for multifaceted, perfectly imperfect characters, a charming romance, and a realistic portrayal of college and falling in love for the first time. Thank you Rainbow Rowell for giving the world Cather Avery.

*I think it’s really cool that this story takes place in Nebraska, one of the most underrated states in the US. Who writes about Nebraska?